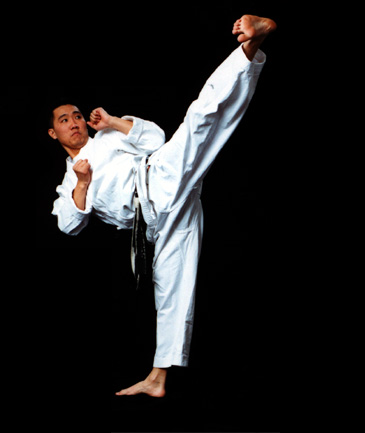 Master Kim founded Yong Studios after years of teaching martial arts at other Tae Kwon Do schools in the Washington DC area. Born in Korea, Master Kim came to the United States when he was nine. Since then he has studied, taught, and competed in martial arts. He also has a degree in economics from the University of Maryland. Recently, I had the opportunity to interview Master Kim while having lunch at an area Korean restaurant. Master Kim spoke a few quick words in Korean, and soon the table was flooded with a dizzying variety of Korean dishes. After a delightful meal we spoke for about 45 minutes. Here is a somewhat condensed version of the interview.

Dan: When did you begin studying martial arts?

Master Kim: I started formally around 12, but I also did it when I went to church. It wasn’t a formal school, we did it there and played around as kids. Also, when I went to school in Korea, I remember doing some kicks in P.E. class.

Dan: Why did you start formally studying Tae Kwon Do?

Master Kim: I started doing it because my mom sent me. She thought I was out of control, that I needed discipline. I’m sure that’s why a lot of people do it. I don’t know if there’s one true answer to why people do martial arts. Whatever reason you come in for, though, you have to be open minded. You might come in looking for one thing but in martial arts there are always more things that you might not expect. Some people come in because they are insecure and they want to know how to fight. They think that if they learn how to fight, that it’s going to make them more confident. Martial arts builds confidence because you do something that’s physical, something you believed you couldn’t do. You overcome that and your confidence builds. I don’t think there’s one definitive answer or 2,3, or 4 answers to why people do martial arts. I do it because I enjoy it. It makes me feel good about myself.

Dan: You have taught thousands of students in many different environments. What, in your mind makes a good student of the martial arts?

Master Kim: I like teaching someone who is patient, hard working, and has positive attitude; someone who is disciplined, who does things without being told, who will come in and do things on their own, and who is willing to help other people. In order for you to be good at something you have to do it. If you want to be a good student, sometimes it helps if you teach others. Then you understand what it takes for a teacher to teach, so you appreciate it a little bit more.

Dan: Some students seem to jump from one school to another, learning a little of this and a little of that before they really mastered anything. Do you think this helps or hurts?

Master Kim: It depends on the person. Personally, I don’t think it’s a good idea. I can understand going from one school to another because you go to, let’s say, Tai Chi and it’s not what you expect. So you go try something else to see if it fits your personality better. But generally, if you are there at least get the basics down. If you’re studying Spanish, you can’t do Spanish for a little while and then decide to go do French. Maybe it translates in some ways and some things might be similar. But in the end you get too much of a mix and you have nothing. If you’re changing school because the martial arts style is not what you thought it was going to be, or because you don’t like the instructor, that’s understandable. If you’re moving, if your school closes down, god forbid, knock on wood, your instructor dies, knock on wood again, something like that, you change schools.

Dan: You teach a fairly traditional approach to martial arts, but you have also incorporated a lot of modern conditioning and competition techniques. Do you have a philosophy of tradition versus change in martial arts?

Master Kim: I think you have to keep some of the tradition and the history so that you can really appreciate it. But at the same time, I think it’s important that you do have change.

The simple technology and science that existed when martial arts first started is different than what we have now. We know a lot more about the human body then they did then, so some things have to change. But at the same time, if somebody’s been doing something for 2000 years there’s a reason. I figure they gotta know more than I do. I think you have to have a mix of both, I don’t think you can go to either extreme, you can’t be all traditional and completely modern either. If you go completely traditional you miss out on some things. A lot of training I do now includes a bit of cross training. But if you do everything the modern way, then you never learn why some things are done a certain way. It’s in the traditional movements where subtle technique is hidden. If you don’t practice those, then you’re going to have gaps in your ability. I think you have to do both. I think it’s stupid to do one and not the other.

Dan: Some martial arts school seem all about business, others try to pretend there is no business side, how do you find the balance?

Master Kim: I don’t lie about the fact that this is a business. I have a rent to pay. I provide a service, so I want to be paid for that service. But I don’t want to rip them off, that’s why I don’t do a lot of in school marketing. A lot of other schools require their students to bring in a certain number of new students a month, or they sign you to a contract and you’re locked in whether you come to classes or not. We don’t do anything like that.

I’d like for my students to bring in their friends, I’d like to make a million dollars from teaching martial arts. I don’t lie about it, but I don’t put up this front that we’re this zen buddhist traditional martial arts place. I think a lot of that is nonsense. I provide honest service for a fair price. There are guys out there who charge $250 a month, and you can come only 2 or 3 times a week. Then they sign you to a 2 or 3 year contract, and if you don’t come they still take your money.

We’re pretty simple, if somebody doesn’t want to come in; all they have to do is call me. I love Tae Kwon Do. I would do it for free. If somebody would give me a grant and pay for my bills and let me live, I would still do it. If I won the lottery, I would get a small space and I would have classes 3 or 4 days a week. I wouldn’t advertise; I would just teach class, and I would charge just enough to pay rent. I have fun teaching. We’re more martial arts than business, and we’re a martial arts school that happens to be a business. A lot of people open up a business that happens to be a martial arts school.

Master Kim: I think that most people pretty much go through that. I don’t think they really want to quit. They’re frustrated because martial arts is hard. As you do it over the years, it takes a toll on your body, and it gets harder. I stopped for about 18 months, mostly because of outside circumstances. A lot of people stop because they get tired. It’s physically demanding and mentally challenging. Not to sound mean, but most people quit because they’re just wimps. They don’t want to face up to the challenge, because it’s difficult. But that’s what winners do; winners challenge themselves when it gets hard. Most people always have an excuse, they’re too busy, too this. too that. Those are all excuses. I was taught a long time ago not to make excuses. You either do something because you want to do it, or you don’t do it because you don’t want to do it. There’s no “I can’t do it because of this or that.” In the end most everybody does whatever they do because they want to. Most people who quit are quitting because they’re not having fun or they’re not learning and enjoying it for some reason.

If you’re quitting because you don’t enjoy it, that’s fine. I always say “Not everybody likes cheese”. You do martial arts for 2 years, 5 years, 10 years, then you might realize you’re not enjoying it anymore. That’s fine. But when people want to stop because it gets difficult or challenging I ask them to think about what they would say if they were a parent or a teacher. You’d say it’s going to get easier. You’d want to teach perseverance. Taking a break sometimes is not a bad idea. One of my instructors used to say, “no matter how much you like ice cream, if you have it everyday, you’ll get sick of it.” Taking a break doesn’t mean you’re not going to want to have ice cream ever again. If you’re doing martial arts consistently every day, taking a break is not a bad idea.

For parents, sometimes the kids are going to say “I don’t like it, I don’t want to do it anymore.” Usually that’s code for “I need a break.” Sometimes as adults we say “no you gotta go”, because we want to teach them discipline. But at the same time you should understand they might be really tired, maybe they had a fight with their best friend, maybe they had rough day at school, maybe their teacher yelled at them, maybe they just need a break. A day, a week, is not a bad idea. If it goes beyond that, then it’s time to say “you made a commitment to do this you have to follow through.” It is important to teach them perseverance and discipline.

Dan: Is there a best martial art? Or does it depend on student and teacher?

Tae Kwon Do is based on linear, straight-line techniques, so it fits my personality. It fits a lot of other personalities too, not just mine, but it fits me well. One guy taught Tae Kwon Do for 16, 17 years, only in the last 5 years he’s decided to go to a soft circular style. That’s fine, that doesn’t mean that style is better, but it’s a different approach.

I don’t think there’s one style that’s the ultimate martial art. I think it’s a combination of what you are like, what you enjoy, and what you’re good at. Part of it is how the instructor teaches the martial art, too.

Dan: How do you see martial arts and Tae Kwon Do developing in the 21st century?

Master Kim: I wish I were as smart as these guys that say, “I see this and that.” I wish I could tell you, but I really don’t know. When I was doing martial arts it was all boys and young men, very few women. At my school right now I have almost an even balance of women and men. It’s changing.

All I know for sure is that, I want to be like my instructor. 70 some odd years old and still kicking and punching everyday.